Wrongly trivialized by the media, cataract surgery is a major intraocular procedure. It is the only way to improve a deficient visual function – unlike eye drops, which are instead prescribed to delay both the development and progression of the deterioration of the vision.

A cataract is a loss of transparency of the lens, which causes discomfort and decreases the visual acuity.

Usually the distant vision is affected before the near vision. Though aging usually causes the clouding of the crystalline lens, other factors can also be responsible such as trauma, radiation, high myopia, certain medications, metabolic disorders such as diabetes, or even heredity.

In France more than 750 000 people per year receive cataract surgery.

The intervention consists in removing the cataract lens with the help of modern techniques of ocular microsurgery. In its place is implanted a definitive synthetic intraocular lens called “implant,” whose function is to replace the normal role of the lens – creating a sharp image on the retina.

Prior to the procedure, the surgeon performs an examination called biometry, to calculate in advance the appropriate power of the implant. However, this analysis has a certain degree of inaccuracy on high myopic patients and patients who have had previous refractive surgery.

Given that the intra ocular lens only exceptionally currently corrects presbyopia – and therefore does not allow accommodation – it will therefore occasionally be necessary to wear either divergent or convergent corrective lenses. Multifocal intra ocular lenses dramatically reduce spectacles dependence but follow very strict implantation rules, for they may induce glare and halos; they can be proposed on a case-by-case basis. 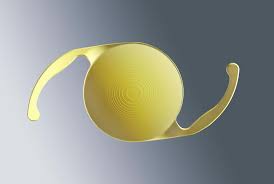 The length of stay at the clinic will be approximately two hours. Patients should arrive about one hour prior to surgery, which will take place under local anaesthesia – consisting in the instillation of anaesthetic eye drops or periocular injections. The average length of the procedure is around fifteen minutes, with a 30 to 40 minute preparation in the operating room. A snack is served after the intervention, immediately before departure. A protective shell is placed on the operated eye until the day after the intervention. It is replaced by a pair of glasses – no matter which type – whose role is to protect the eye from a possible shock during the following days.

In a few particular cases, a hospitalization may be useful or necessary. Its duration will be determined accurately in an “à la carte” fashion at the time of the preoperative office visit. The decision will take into account medical requirements (e.g. anticoagulant treatment), personal preferences, the family environment, the place of housing, etc.

The femtosecond laser, which has long been used in refractive surgery, has also begun to be employed in cataract surgery. Though it still cannot complete the entirety of the procedure – which is still based on phacoemulsification through ultrasounds – it can nonetheless serve as a substitute for the surgeon’s hand to perform several surgical steps. This laser is especially useful in making corneal incisions and in opening the anterior capsular. It also prepares the fragmentation of the crystalline nucleus before its suction by phacoemulsification. All these steps are controlled by an ocular imaging performed in real time.

The use of a femtosecond laser during the lens surgery increases the cost and the duration of the intervention. It would theoretically enable a better postoperative refractive accuracy, but its benefits remain controversial to this day. It is a future-oriented technique whose major interest resides in its ability to fully replace ultrasounds.

The aftermath of the surgery is generally painless, except for a temporary foreign body sensation. The time needed for a complete visual recovery varies from one patient to another (from twenty four hours to several days). The restoration of a normal vision requires the prescription of new glasses, which is done between the first and the fourth weeks post-surgery. Moreover, the presence of a concomitant eye disease may limit visual recovery. Local treatments last several weeks and consist in the instillation of eye drops, and sometimes in the application of an ointment.

Zero risk surgery unfortunately does not exist, including cataract surgery. Exceptional and unforeseen issues can thus be observed at the time of surgery or during the postoperative period. A posterior capsular rupture (1%) could lead to a change of operative strategy, such as the partial ablation of the vitreous, the replacement of the intended intraocular lens by another type located in front of the capsular bag or even, in the most serious cases, to cancel the implantation at the same time, leave to perform this implantation on a second step. Postoperative retinal oedemas are exceptional, and usually spontaneously regress. They often occur when the posterior capsule has been broken. Additionally, rare but serious, postoperative infections (1-3/1000) are characterized by a painful eye and abundant secretions. They require an urgent consultation along with an aggressive treatment. An intraocular haemorrhage may sometimes be observed and may delay the visual recovery. Nonetheless, it usually disappears on its own in the majority of cases. The perforation of the eyeball during local anaesthesia and the intraoperative expulsive haemorrhage, which both can lead to a permanent loss of vision, have thankfully become extremely rare complications. Finally, cataract interventions include a very low postoperative risk of detachment of the retina (1/2 % to 2 % depending on the case). This risk is increased in high myopia patients, in young subjects, and in case of rupture of the posterior capsule. Miscalculations of the power of the intra ocular lens are rare, given the systematic preoperative ultrasounds, but can potentially require a reoperation.

Other complications are less severe. They can for instance be an insufficiently tight scar, a partial collapse of the upper eyelid, a hematoma in the white of the eye or eyelid, the perception of floaters, a transitory inflammation of the operated eye which usually spontaneously reabsorb themselves in a fortnight.

The most common problem, occurring on average in one patient out of two or three within 5 years post-surgery, is the emergence of what is called a secondary cataract. The latter is a late clouding of the envelope in which the implant is placed. In such cases, the immediate postoperative visual result is quite satisfactory. However, the visual acuity then begins to drop, as the cataract had reappeared. This complication does not require a reoperation and is easily resolved by a secondary opening of the posterior capsule with a YAG laser. This one-minute long procedure is painless and clears once more the visual axis, thereby resulting in a final and almost immediate restoration of the visual acuity obtained post-surgery.

Cataract surgery has nowadays proven its maturity. Though it may, like any other surgical procedure, encounter problems – such as inadequate healing, risk of infection, or other unpredictable hazards including the need for a reoperation – it nonetheless generates overall a great satisfaction among surgical patients.

and the femtosecond laser...

Dr Marc Weiser was forced to terminate his activities suddenly, for medical reasons.

You can now turn to his partner, Dr Guy Montefiore, who has worked with him for over 30 years. He has the same human values, the same experience, and the same surgical excellence. He also practices in the same hospitals.