Corneal transplants can surgically treat all corneal diseases, which profoundly affect its transparency and visual function.

A normal human cornea consists of several layers, each having a specific role in the corneal transparency and in the quality of vision. From the closest to the surface to the deepest, these layers are as follow: the epithelium – the outermost layer, providing the smoothness of the surface of the cornea; Bowman’s membrane; the corneal stroma – which constitutes the bulk of the total thickness of the cornea and contributes to its architecture; and finally the endothelium, a layer of cells that do not reproduce and whose role is to pump water from the cornea in order to ensure full transparency.

Any pathology in the anterior layers of the cornea creates a more or less dense opacity. On the other hand, a disease of the endothelium will result in the occurrence of a diffuse or localized corneal edema.

The intervention is conducted with the help of modern techniques of ocular microsurgery, and consists in totally (in the case of a penetrating keratoplasty) or partially (in the case of a lamellar keratoplasty) removing the opaque or edematous cornea. In its place is implanted a human cornea from an eye bank. Every candidate for a corneal transplant is first placed on a national waiting list established by the French Transplant Establishment. The previous shortage of corneal tissue no longer being an issue, it is thus possible to have a graft in one to two months. All graft tissue is first tested by the eye bank to ensure it is sufficiently rich in cells and does not carry a known communicable disease. In doubt, the graft is destroyed and the transplantation will be delayed approximately one month. Synthetic cornea transplants remain to this date a purely experimental alternative.

The procedure is performed under local or general anesthesia, and lasts on average 30 to 45 minutes. It may optionally be combined with a particular troublesome cataract surgery, with a medically unbalanced glaucoma surgery, or with a change of intraocular lens.

If a penetrating keratoplasty is performed, all corneal layers are removed and replaced within a 8.00 to 8.50mm diameter. On average, 16 stitches are placed around the graft in a 360-degree fashion to permit its healing. A protective shell can be placed on the operated eye until the day after the intervention. Otherwise, it will be replaced by a pair of glasses – no matter which type – whose role is to protect the eye from a possible shock.

But more and more lamellar grafts are now performed. In case of superficial layers pathology, a pre-descemetic transplantation (DALK Deep Anterior Lamellar Keratoplasty) will be chosen, because keeping the receiver endothelium dramatically reduces the risk of graft rejection. If the deep layer of the cornea is concerned the most appropriate procedure will be an endothelial transplantation (DMEK Descemet Membrane Endothelial Keratoplasty); such procedure can be performed through a very small incision and therefore allows much faster visual rehabilitation.

A corneal transplant can be performed in an outpatient surgery fashion, only needing the patient to remain in the clinic for a few hours. In other cases, one or two night hospitalization may be useful or necessary. Its duration will be determined accurately in an “à la carte” fashion at the time of the preoperative office visit. The decision will take into account medical requirements (e.g. anticoagulant treatments), personal preferences, the family environment, the place of housing, etc.

The aftermath of the surgery is generally painless, except for a temporary foreign body sensation. The time needed for a complete visual recovery is delayed for six months, at which time the stiches can be removed. Once the sutures are removed, the restoration of a satisfactory vision may require a surgical intervention to cure an astigmatism induced by the transplant, which is conducted with an excimer laser. Moreover, the presence of concomitant eye diseases may limit visual recovery. Local treatments last several weeks and consist in the instillation of eye drops, and sometimes in the application of ointments.

Zero risk surgery unfortunately does not exist, including cataract surgery. Exceptional and unforeseen issues can thus be observed at the time of surgery or during the postoperative period. Additionally, rare but serious, postoperative infections (1-3/1000) are characterized by a painful eye and abundant secretions. They require an urgent consultation along with an aggressive treatment. An intraocular hemorrhage may sometimes be observed and may delay the visual recovery. Nonetheless, it usually disappears on its own in the majority of cases. The perforation of the eyeball during local anesthesia and the intraoperative expulsive hemorrhage, which both led to a permanent loss of vision, have thankfully become extremely rare complications.

Other complications are less severe. They can for instance be an insufficiently tight scar, a partial collapse of the upper eyelid, a hematoma in the white of the eye or eyelid, the perception of floaters, a transitory inflammation of the operated eye sometimes accompanied by an augmentation of the intraocular pressure, trophic disorders of corneal integrity – especially in cases of poor occlusion of the eyelids and/or dry eye – or finally a recovery of the previous pathology on the graft itself (ocular herpes).

The most common problem, occurring on average in 5-10 % of patients operated on, is the rejection of the transplant. It does not result in a loss of the eye, but instead in an edema of the graft, which significantly reduces the visual acuity post surgery. This rejection phenomenon varies according to the type of disease that motivated the corneal transplant, and always occurs after a more or less long latency period (anywhere from a few months to a few years). A rejection can initially be treated by aggressive local or general anti-inflammatory treatments. In the event of failure, it may be possible to attempt a second transplant. Its prognosis is generally good.

Corneal transplants have nowadays proven their maturity. Though they may, like any other surgical procedure, encounter problems – such as inadequate healing, risk of infection, or other unpredictable hazards including the need for a reoperation – this procedure nonetheless generates overall a great satisfaction among surgical patients. 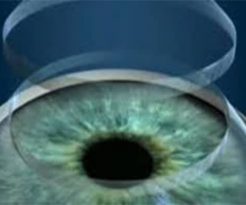 Dr Marc Weiser was forced to terminate his activities suddenly, for medical reasons.

You can now turn to his partner, Dr Guy Montefiore, who has worked with him for over 30 years. He has the same human values, the same experience, and the same surgical excellence. He also practices in the same hospitals.